We started our ceremony today with the sad news that our previous Chairman, Mr Malcolm Head had passed away this morning. Malcolm was Chair of the BLP during its most challenging period. The most recent ceremony that he attended was the July Last Post last month. Without his vision and drive, the Brookwood Last Post would not have survived and would now be consigned to history. We will miss him terribly.

Today we held a multi faith ceremony remembering those Commonwealth soldiers killed in all wars from across the faith spectrum.

We had representatives from the Bahá’í, Christian, Hindu, Muslim and Sikh faiths all of whom held a prayer. 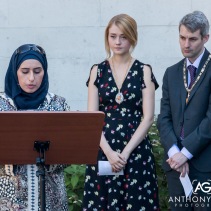 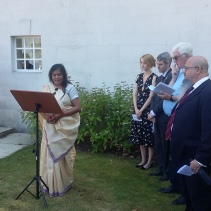 Private Sitch died 100 years ago on Monday, 5th August 1918, his age isn’t listed, nor his address, but the fact that he was in the Royal West Surreys suggests that he was a local man, albeit he had transferred to the Labour Corps by the time of his death.

We read out the poem ‘The Crosses’ by Bill Mitton.

At the end of the ceremony, our Chairman, Kevin Davis and Woking Mayor, Cllr Will Forster inspected the Standards on parade. 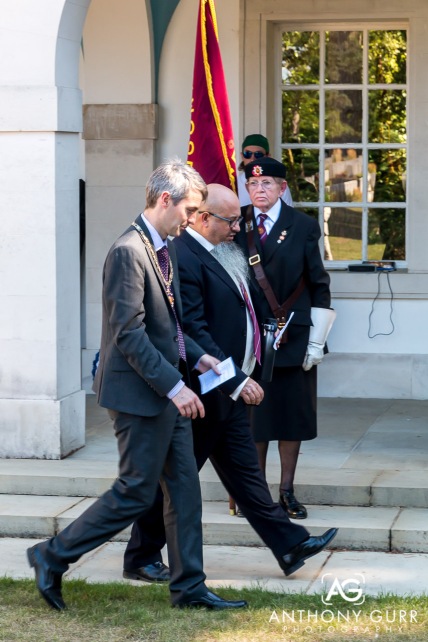 We had four Standards on parade, and our Standard Bearer today was Mrs Sue Stallard. We had fewer Standards today as some members are attending the Great Pilgrimage 90 Parade in Belgium.

Our bugler was Mrs Ruth Moore, our Reverend was Mr Rob Bennett, and additional speakers were John Kingsbury and Paul McCue. Afterwards we went round to the Trench Experience for refreshments.

It was a moving ceremony remembering the hundreds of thousands of lives lost from the Muslim community in the first and second world wars.

We will remember them.