Today, with snow and ice on the ground, relatively few made it to the short Last Post Ceremony. Members who had a considerable distance to travel were discouraged from coming. As such, there were around 15 of us, and our Standard was not on parade. We followed the short ceremony.

We remembered Private Richard John De Mansfield Absolon from the Parachute Regiment, service number 24547055. Private Absolon was killed in the Falklands on 11/12 June 1982. He was a scout / sniper with the 3rd Battalion and was tasked with gaining information on the enemy deployed in defensive positions in the Mount Longdon area.

On the night of 11/12 June, with his partner, he led B Company on to Mount Longdon in the first assault to capture the position. He was tragically killed by mortar fire the next morning. He was awarded the Military Medal and was from Weybridge, Surrey.

We had Standards from the Artists Rifles and the Maverick Explorer Unit. Our bugler was Mrs Ruth Moore. 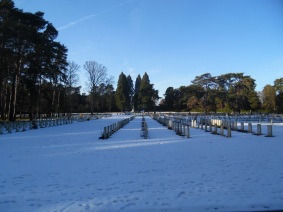 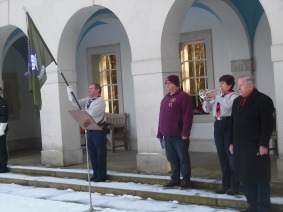 Afterwards we had refreshments at The Trench Experience.