Today in the nice sunshine, we welcomed members of Woking District Scouts for our short ceremony. The Scouts are planning to lay a wreath at the Menin Gate on 10 November 2018 and form up as part of the Poppy Parade on the 11 November through Ypres. As part of this, Scouts are attending our ceremony to gain experience with parading Standards. We are very pleased to see them with us.

We had 10 Standards on parade today with six of them from the Scouts. 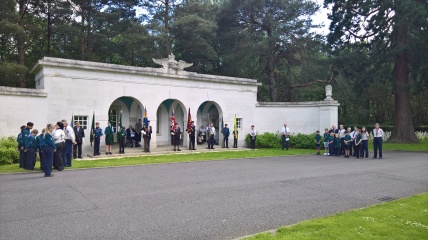 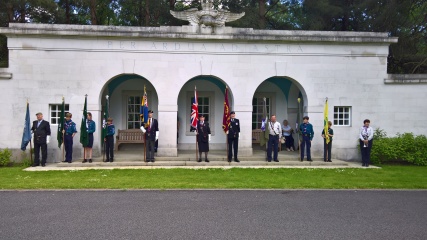 We remembered Flying Officer Ronald Charles Wood, 12251. A flying instructor with 20 (Pilots) Advanced Flying Unit, based at RAF Kidlington, F/O Wood was killed when the Airspeed Oxford in which he was flying collided in mid-air with a similar aircraft of the same unit on 3rd June 1943 – exactly 75 years ago. Both aircraft, on night flying exercises, crashed and five men died.

F/O Wood was the son of Alfred and Alice Mary Wood of Woking, Surrey. He is commemorated on the war memorial at Old Woking and buried in plot 23.C.12 at Brookwood Military Cemetery. He was 25 years old when he died.

Afterwards we had some refreshments round at the Trench Experience.